Colin James's column for the Press for 26 December 2009


Making a Christmas meaning of life


While most big-name magazines have been contracting and even going out of print under the internet's assault, The Economist has been expanding.

The Economist is a distinctively English -- Oxbridge -- institution, a weekly established in 1843 to spread the word about free markets. From the 1970s it has pushed into the United States, Asia -- everywhere.

An Atlantic Monthly article in July forecast that it would soon overtake Newsweek in circulation in the United States. "Virtually alone among magazines, The Economist saw its advertising revenue increase last year by 25 per cent. Newsweek's and Time's dropped 27 per cent and 14 per cent respectively," Michael Hirschorn wrote.

Hirschorn ascribed this success to its being a "general-interest magazine for an ever-increasing audience, the self-styled global elite". And in fact its compact analyses of economies and politics and technology and much else, from drugs to the arts to climate change to (this week) the future of "progress", are challenging and engaging. It can be insufferably superior and opinionated and even shallow and wrong. But it is on the whole a quality read -- an apostasy in a world of shallow, slick marketers who bend and degrade everything from pork to politicians.

Tucked at the back of each week's Economist is an obituary. There you come across the rich and famous and also people you have never heard of who have made a mark that caught the editor's eye, a conservationist or anthropologist or "gambler and gangster".

Princess Di was there, "famous for being famous". So, in the edition of August 31 2006, was our Queen, Te Arikinui Dame Te Atairangikaahu, bearer of "the mana of a born chief" and (quoting Sir Tipene O'Regan) a "symbol of graciousness" in a society that "doesn't do grace very well".

This year two of those obituaries tell, when put together, a Christmas story.

One was of Marek Edelman, previously unknown to me, a "deputy commander of 220 untrained 'boys' with pistols and home-made explosives" in the Warsaw ghetto in 1943 who survived to become a heart specialist, be a Solidarity supporter and stay resolutely Polish despite waves of anti-Semitism, one of which drove his wife and daughter abroad. He lived to 90.

The other was of Christopher Nolan, an Irish poet of whom I first read 30 years ago, who, deprived of oxygen at birth, could not control his limbs or his voice but nevertheless found a way to speak his genius. He lived to 43.

Each had spirit. And each knew the power of love.

Edelman, the Economist wrote, saw amidst the pervasive death and disease of the ghetto a "terrible apathy" in which people no longer saw or believed the random horrors around them. He "tried to rouse them" by making newspapers and then by fighting: the "most important thing was just to be alive".

But there was another important thing: "His last book ... made a point of describing the love affairs of the Warsaw ghetto: the 'marvellous things' that happened and the ecstatic moments of happiness, when terrified and lonely people were thrown together. Man was naturally a beast but love could overwhelm him and love could be taught."

For Nolan, "his mother had told him, when he was three and crying with frustration, that she liked him just as he was. From that point, 'he [fanned] the only spark he saw, his being alive'."

It was his mother who, with love, kept that spark alive and made it possible for him to make a blaze. She cradled his head while he picked out a letter at a time on a typewriter with a rubber-tipped stick tied to his head, taking up to 15 minutes to write a word. She did that from when he was 11 till his death.

He wrote astonishing poetry. His autobiography won Whitbread book of the year. He lived a big life from inside a narrow cage.

He and Edelman teach that there are no automatic meanings. There is only a life. They each -- one put through a living hell as a young man, the other extremely limited by a bad birth -- made the most of what they were given.
That is a Christmas message: look for what can be done not what can't be done.

Edelman seemingly bore no grudges: he "refused to express open hatred for the Nazis". Instead there was a "quiet thoughtfulness". That, too, is a Christmas message.

Nolan once "threw out his left arm in a great arc to give Christ two fingers because he was to blame". The "he" was not the actual Christ but his representation, in religion, of the caprice of forces humans cannot yet command and so seek to give a name and a form to. Christ would have agreed with the Christmas message implicit in Nolan's gesture: that no one -- and especially no child -- deserves ill luck, ill health, ill treatment or ill will.

this is a remarkable photo

Posted by christine at 5:09 PM No comments: Links to this post 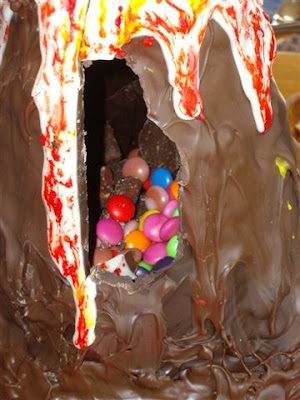 The picture doesn't do justice to this work of imagination and ingenuity!
Posted by christine at 4:46 PM 1 comment: Links to this post

After a week's intensive training in ArcGIS - what next!?
Posted by christine at 5:03 PM No comments: Links to this post

This chap says we have forsaken 'all' to live at bottom of SI!! 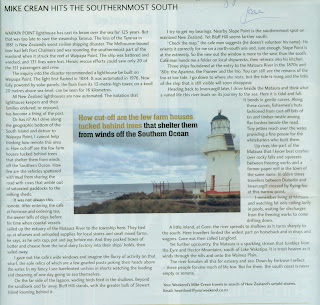 here's my reply!
Help, Mike! - I need you to tell me what it is I have forsaken to live on the southernmost coast!
Truly I love your article but is there really something I haven't thought of, that I am missing out on?
I have spent half my life here - for the earlier half I lived and worked on four continents, learned six languages after English, attended or was employed by five universities, also four transnational corporates, including in the biggest worst cities such as Johannesburg and Sao Paulo.
I've been to 'The Uttermost part of the Earth' (Tierra del Fuego), hitched across Sudan, ridden horses in such as the wild Eastern Highlands of Zimbabwe and Medellin (Colombia), kayaked on Bowen Island off Vancouver, hiked to Glacier Gray (Parque del Paine, Chile), climbed Mount Kenya twice, am I going on too long? There's lots more!
Right now I'm sitting in blazing sunshine with door open, no sound except birds, trees blossoming fit to bust, calves and lambs littering my pastoral heaven. Family is coming and going on relaxed Sunday jobs - I'm expecting visitors from Bethesda, Maryland, another place I know a little.
I've had the delight of National Radio interviews - Saturday and Sunday are so often a major source of satisfaction.
I can look up the entire contents of the collective human brain via the magic of Google and its sisters, and if I want to read a particular book for bedtime I can order through the library.
I'm in touch with people from all of those distant places that are part of my past.
For entertainment - you should see the amount of local activities there are to choose from - then there is Invercargill half an hour away with the whole gamut of possibilities - as long as you take up the offerings when they come - there isn't a ballet performance every night, that's for sure.
My friends and neighbours include Canadians, a Norwegian, South Africans, British, Dutch, and a lady from Leeston.
What about our children, what have they forsaken? Oh well Thomas drove from Perth to Brisbane at 17, worked in a Post Office in deepest darkest London, on big machinery helped flatten an old coal bing in central Scotland, drove across the Canadian Rockies, circuited Nova Scotia, seen NYC, Washington, Las Vegas, Los Angeles - oh and Finland, Norway, Sweden, Germany, France, Belgium, UK, Bali. He is an engineer and designer in metal, wood, electronics, water supply and a quiet gentle stockman. He is happily married to a beautiful girl from Auckland - who looks as good in overalls and gumboots as in her high heels.
Our daughter took about five years to get her 'OE' - a year in Norway, 18 months in Scotland, a season with cattle and horses in Aussie's hot wet tropics, another season shearing sheep in South Australia. She's a trained vet nurse, a trained travel agent, a trained dairy inseminator, now a successful real estate agent, living in Invercargill.
I haven't mentioned how our summers are full of visitors from all over the world. Our mantra is 'Strangers are just friends we haven't met'. After twenty years of having people to stay we still look forward to making a welcome and having a good conversation.
Yes, all right, Mike, there are times I feel a bit isolated. That's when I think it's up to me to become more self-sufficient. The opportunities for stimulation are always there. Eg your article has stimulated me to respond in a lively fashion. :) Now I've neglected the lunch!
Thanks again for writing about us and about Waipapa Point historic Lighthouse and the tragedy of the Tararua. By the way there is an 'Opening' on 10th October, of 'improvements' made by DoC - car park, toilets, interpretation, a new walkway. It has tamed the wild landscape, somewhat to my regret.
'Remoteness is a state of mind'.
Do please call in and visit when next you venture south!
Very best wishes
Christine J McKenzie

And his response - 'remoteness -pah!
Dear Christine
Many thanks for your exhilirating letter. Feedback to my magazine column is always fun (even when it takes me to task) but your response was a sheer joy to read. I love to hear of someone who has done so many interesting things and can still feel enraptured about Home.
Perhaps everything is relative, after all. Surely most readers would find your area remote, compared to their mostly suburban wildernesses. However, I tend to agree with you, that isolation has become an outdated concept since modern communications brought the world so close.
I lived in Southland for three years and explored your coast and the Catlins before it became fashionable (or the road sealed) _ in the early 1970s. It is "one of my favourite places", though not, I fear, one where I would want to live. Like many interesting places, it is nice to know it is there and to be able to go back and savour it from time to time. Perhaps you feel the same way about Christchurch, and I couldn't blame you.
Certainly, I would love to stop for a chat next time I venture south.
Regards
Mike Crean'
Posted by christine at 4:34 PM No comments: Links to this post Posted by christine at 12:45 AM No comments: Links to this post Posted by christine at 5:50 PM No comments: Links to this post

The Garden House near Fortrose in NZ

The Garden House near Fortrose in New Zealand

Promote Your Page Too